Heat Roadmap Europe (HRE) is a series of studies that have been carried out since 2012. The first three studies resulted in a total of 18 different reports, primarily relating to the long-term changes that are necessary to implement in order to decarbonise the heating and cooling sector in Europe.

When the first study began, in 2012, it was clear that there was a large amount of basic and critical data missing about the heating sector in Europe, which was a major barrier for the design and analysis of future solutions for the heating sector. With this in mind, the three first HRE had the mission of building up the data needed in order to allow major studies to happen.

Click on the study titles below and read more about them. 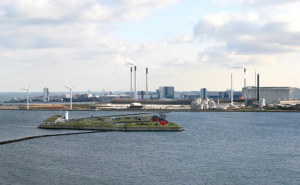 Heat Plan Denmark (Varmeplan Danmark) was the first ever study combining local mapping of the heat demand with national energy planning to create a holistic heat strategy for an EU Member State. It outlined how various solutions could be combined in the heating sector of Denmark, to simultaneously reduce energy costs and decarbonise the Danish heating sector. It was first published in 2008, with a follow-up study in 2010, both of which were instrumental in defining Danish policies for the heating sector. This project was a collaboration between Aalborg University and Rambøll. 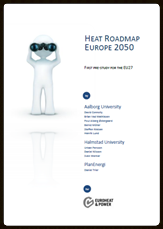 Heat Roadmap Europe 1 was developed to understand if the approach from Heat Plan Denmark could be extended to a European scale, and if it was possible to make a geographic and system analysis of the European heating sector, in addition to introducing the idea that district heating could play a significant role in decarbonising the EU energy system, as well as suppressing
costs.

The main outcomes were a validation of the potential district heating had in reducing costs, primary energy supply, integrating renewables, and creating a local economy for energy. Additionally, HRE1 allowed for the validation of the methodology, and the identification of improvements in the data and methodological processes. 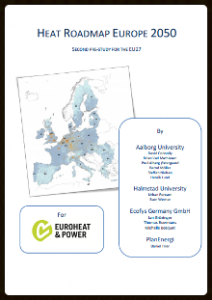 In 2009 the European Council made the objective for the EU to decarbonise its energy system to at least 80% below the 1990 level by 2050, without affecting general economic growth. A scenario which achieves these goals is the Energy Efficiency scenario in the Energy Roadmap 2050 report by the European Commission. The Heat Roadmap Europe scenario proposed here achieves these same CO2 reduction, but at a lower cost.

Heat Roadmap Europe 2 is the first study on the EU27 scale which combines geographical mapping of energy demand and supply in unprecedented detail with detailed energy system modelling. Heat Roadmap Europe identifies the potential for using local resources across Europe, and subsequently applies this in the EU27 energy system. Local conditions are considered using geographical information systems (GIS) and combined with hour-by-hour energy system analyses for the EU27, which enables us to find a robust strategy to increase competitiveness, integrate more renewables and reduce the risks in the energy supply. By analysing heat savings and energy efficiency, by investigating local conditions, and by making energy system analyses we are able to identify a balance between heat savings and key infrastructural changes in the energy supply.The results are recommendations for a redesign of the European heat supply.

Heat Roadmap Europe 3 consisted of a study conducted on the work package 2 of the STRATEGO project.

The overall aim in STRATEGO WP2 was to develop low-carbon heating and cooling strategies, which are called Heat Roadmaps, and subsequently to quantify the impact of implementing them at a national level for five EU Member States, which are Czech Republic, Croatia, Italy, Romania, and the United Kingdom.

These countries vary considerably in terms of population, climate, resources, and energy supply, so the key results, conclusions, and recommendations presented in this report can inform national energy policy across all of Europe.

The overall conclusion is that a combination of energy efficiency measures, in the form of heat savings, district heating in the urban areas, and heat pumps in the rural areas, reduces the energy system costs, energy demand, and carbon dioxide emissions in all five STRATEGO countries for the year 2050 compared to a ‘Business-As-Usual’ projection.

The EnergyPLAN  model was used in the STRATEGO project to create hourly energy systems models for each country for the year 2050, which include electricity, heat, cooling, industry, and transport. The links below are for the reports with the results for each STRATEGO country, but models are also available for download here. Factsheets are available for Croatia, Czech Republic, Romania, Italy, and the United Kingdom.

Within four years, it grew from a very small collaboration between a few partners to a three-year project with 14 partners. HRE4 started in March 2016, and came to an end in March 2019.

Navigate in the top menu bar to find out more about HRE4; partners, results and tools.